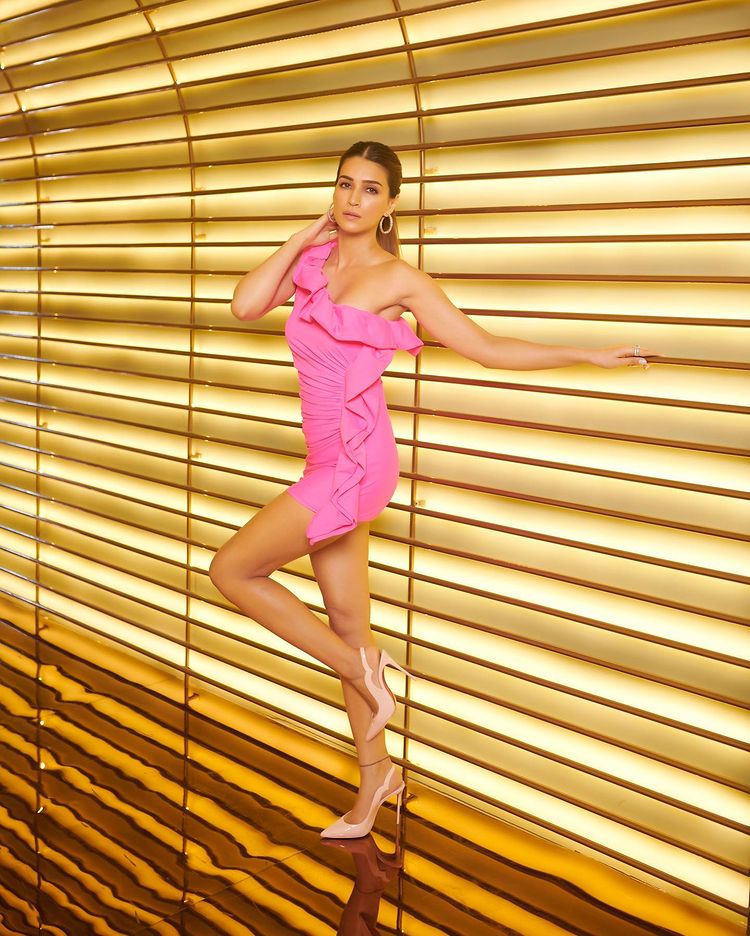 Kriti Sanon has emerged as one of the most popular actresses in the Hindi Film Industry. Ever since her debut in the 2014 film Heropanti alongside Tiger Shroff, Kriti has been constantly in the limelight. With every performance, the actress is showcasing her acting prowess and proving her worth. Very recently, she was acknowledged for her performance in the comedy drama Mimi as she bagged her first Best Actress award.

Kriti Sanon took to Instagram and shared photos of her wearing a stunning pink-coloured ruffle mini dress. Kriti looked breath-taking in the photos that she shared. The actress captioned her post as, “Cotton Candy and some” with a coffee emoticon to follow, suggesting that the Dilwale actress was shooting for her episode of the controversial gossip show Koffee With Karan. She is rumoured to have graced the show with Aditya Roy Kapoor, whom she’s apparently going to romance in Sanjay Leela Bhansali’s next romantic drama. The seventh season of the gossip show premieres on the 7th of July.

On the work front, Kriti Sanon is gearing up for the release of her magnum opus mythological drama film with Prabhas, Adipurush. The film is directed by Tanhaji fame Om Raut. Also, she is reuniting with her Luka Chuppi co-star Kartik Aaryan on Shehzada, her Heropanti co-star, Tiger Shroff, on Ganapath and her Dilwale co-star, Varun Dhawan, on Bhediya. She is in talks with Hansal Mehta for a film and was spotted at Casting Director Mukesh Chhabra’s office, a couple of weeks back. The actress has begun her side hustle as an entrepreneur, 8 years after her acting debut, as she has co-founded the startup, ‘The Tribe’ along with Anushka Nandani, Karan Sawhney, and Robin Behl. Her company offers virtual products like workshops and specific diet plans.