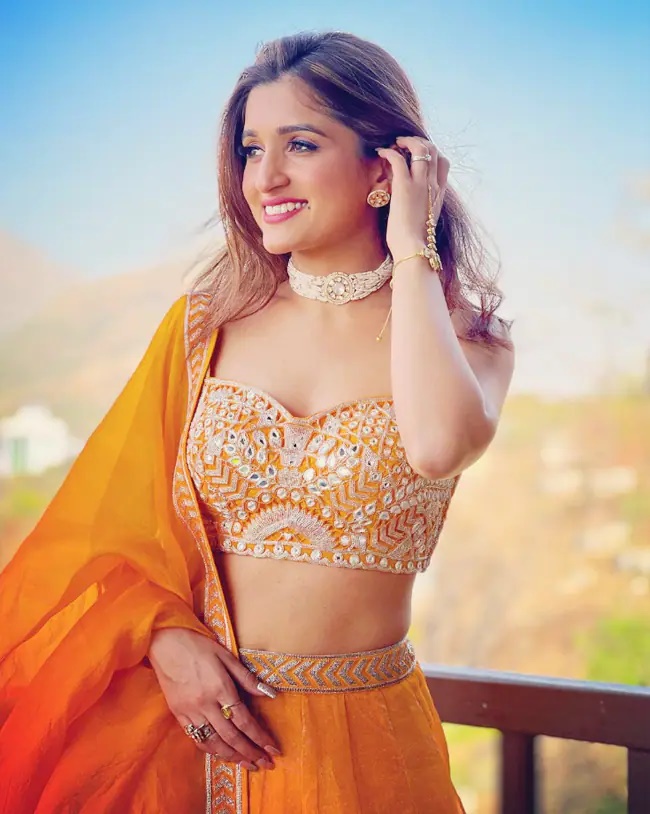 Actor Nidhi Shah is a fashionista both in reel and real-life. The actor has been making waves on the internet with her stunning pictures on social media. In her latest set of photos, Nidhi aka Kinjal from Anupama is seen rocking a beautiful lehenga set.

Kinjal, who is seen flaunting stylish outfits in Anupamaa, is seen wearing a bright orange lehenga by designer Arpita Mehta. Nidhi teams up her lehenga with a pearl choker and a subtle bracelet.

Nidhi Shah aka Kinjal from Anupamaa looks extremely pretty in that colour. She also flashes her million-dollar smile in the photoshoot and flaunts her perfectly toned waistline.

Nidhi Shah teams up her printed lehenga with a heavily embroidered sleeveless blouse. The blouse flaunts a mirror-work signature detailing and hand embroidery by Arpita Mehta.

Anupama actor Nidhi Shah aka Kinjal looks breathtakingly stunning in an orange lehenga. Her fans say ‘Awesome look’ and ‘most beautiful girl’ in the comment section of the post. What do you think of Nidhi’s look?

As seen in Anupamaa, Kinjal is expecting her first child with Toshu and has been told that her pregnancy is a little complicated. She has asked her mom-in-law to be with her in these times and therefore, Anupama has come back into the Shah family to take care of Kinjal

Nidhi Shah’s popularity has increased a lot after she got famous for playing Kinjal in Anupama. It’s the top show on the Hindi television currently and all the characters have their own place in the hearts of the audience.